This Thursday September 30th is Orange Shirt Day. This day, first observed in 2013, was created by Phyllis Webstad, a residential school survivor, to honour the Indigenous children who were removed from their homes and placed in the residential school system. This date was chosen in line with the start of the school year as this was when many children were taken.

Phyllis Webstad has shared her own story of being taken to a residential school in 1973 when she was just six years old. Her granny had gifted her a shiny, bright, orange shirt for her first day of school. But when she arrived, her shirt was taken away from her and her hair was cut. She never got to wear that shirt again:

“The colour orange has always reminded me of that, and how my feelings didn’t matter, how no one cared, and how I felt I was worth nothing,” Phyllis said 40 years later.

Orange Shirt Day offers an opportunity for all Canadians to commemorate the residential school experience, to bear witness and honour the journey to healing by survivors and their families, and to commit to reconciliation.

A Brief History of Residential Schools in Canada

The residential school system commenced in the 1880s; the last residential school closed in 1996. More than 150,000 Indigenous children were taken from their families and community during this time to governmentfunded and church-run residential schools. In the peak of operation in 1931, there were 80 residential schools across the country.
The primary purpose of these schools was to convert and integrate Indigenous children into “mainstream” or Euro-centred Canadian society. Children were removed from their homes based on the assumption that they would more easily assimilate to “mainstream” customs if they were removed from their parent’s and community’s influence. These schools were borne from the prevailing colonial mentality that Euro-Canadian values and culture were superior to Indigenous ones.
Though they were called residential “schools”, many survivors say they felt more like they were being held in violent prisons. Many children suffered horrific abuse in these schools, at the hands of those who were responsible for their care. Children were brutally punished if they spoke their native languages or practiced Indigenous customs. If they wrote letters home to their families, they were forced to write in English which most families did not understand. This created a rift between children and their families; many survivors say that returning home during the summers could be challenging as they felt like they no longer belonged.
The schools were also crowded and unsanitary, causing many children to develop serious illnesses. Thousands of children died from smallpox, measles, flu, and tuberculosis, though the exact number is unknown.
Even though all residential schools have now closed, their effects endure. The traumas many children faced have created challenges in their adult lives which have had ripple effects on subsequent generations. Indigenous populations face high poverty rates and unemployment, poor mental and physical health outcomes, and dramatically higher rates of suicide. Only in recent decades has Canada acknowledged the magnitude of the treatment of Indigenous children in residential schools: this system amounted to historical injustice and cultural genocide.
While acknowledging Canada’s past, it is also important to recognize the tremendous resilience of Indigenous Peoples. Though they have faced decades of injustice, Indigenous peoples and cultures persist. Survivors are strong and courageous; they are determined to heal and move forward.

Reconciliation is defined as repairing or re-establishing a relationship that has been broken. The Truth and Reconciliation Commission of Canada sought to bring light to the conditions faced in Residential Schools and to create an opportunity for Indigenous and non-Indigenous people in Canada to work together to build a mutually respectful relationship.
Earlier this year, legislation was passed making September 30th a federal holiday: National Truth and Reconciliation Day is a day to acknowledge the horrific legacy of residential schools and the attempted genocide of Indigenous peoples. 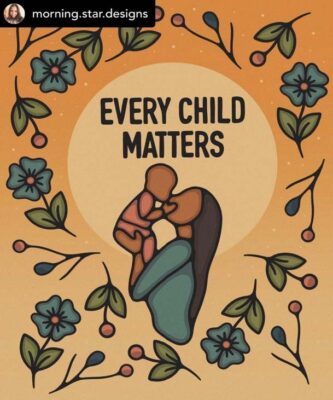 How to Observe Orange Shirt Day

Observers of Orange Shirt Day are encouraged to engage in meaningful conversations about the residential school system and its effects, to create bridges with each other for reconciliation, to acknowledge survivors, and to remember that Every Child Matters.
Listen with open ears to the stories of survivors and their families and honour all those that did not make it. Consider:
1) Quiet reflection
2) Participate in community events
3) Wear orange
4) Expand your awareness
5) Learn more about past and ongoing Indigenous issues in Canada

Mind Forward’s EDI Committee invites you to stand in solidarity with survivors by wearing your Orange Shirt on Thursday.

The language we use matters. According to Dr. Linc Kesler, Associate Professor in First Nations and Indigenous Studies at the University of British Columbia:

“Canada’s historical relationship with the first inhabitants of the land has been shaped by its imperial and colonial history. One result has been that for many years, Indigenous peoples’ respective identities were neither recognized nor respected in mainstream discourse.”

Not all First Peoples and Indigenous Peoples around the world can be grouped together under the one term ‘Indigenous.’ This term is often used knowing that not all Indigenous or Aboriginal Peoples share the same language, culture, or world views.
See the attached UBC Indigenous Peoples Language Guide to familiarize yourself with some terminology and their associated meanings while at the same time increasing your awareness and showing respect for the complex and diverse communities of First Peoples.
Note that as time passes, terminology is subjected to change. This guide should not be taken as an enduring document, but one that supplements your learning over time. 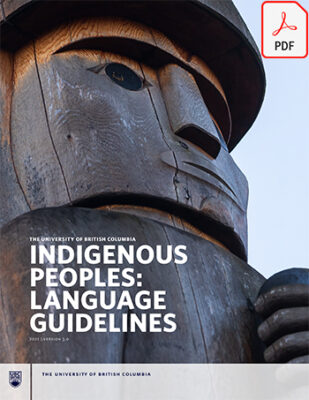 Allyship Through Education – 29Sep2021
Solidarity with Indigenous Communities – 30Sep2021
About