Skip to content
On Christmas Eve in 2004, I was headed to Montreal on the 401 going east.  I stopped for coffee, phoned my parents, and noticed it was getting snowy.
I was back on the highway, and it started snowing more heavily until there was a white out and visibility dropped to 0%.  Suddenly, my car spun out, went airborne, and flew backwards into a ravine.
I was unconscious while the rescue team used the jaws of life to get me out of the car.
I spent three weeks in a coma.  When I woke up, I thought I was still in the ravine and was going to freeze to death.  I was delusional, and time was mixed up, as I thought I had work appointments at the same time.  My dad and others stayed overnight at the hospital with me.
I was brought from Kingston Hospital after three months to Montreal Neurological Rehab Institute.  I spent a year as an in-patient, then another year as an out-patient.
I owe my acute, immediate recovery to my excellent health.  I had never smoked, so my lungs were in VERY good shape. I progressed gradually from a liquid diet to solid food, and today I have a very healthy diet.
My brain injury was similar to shaken baby syndrome.  My neck ligaments needed to be fixed, as I was looking up all the time for the first few years.  I really struggled with my limbs, and still have difficulty with my leg that is in a splint. My balance is off, due to where my head was hit, I’ve lost mobility, and certain skills.
For the longest time I didn’t talk.  However, I’d learned the sign language alphabet in Girl Guides — one of the nurses recognized what I was doing, and posted a chart so I could communicate with visitors.  When I finally did talk, I would ask odd questions, like asking my mother, “Are you a woman?”.
Before my accident, I was an executive, involved in charity work, with an active social life.  So the changes in my life hit me hard. Friends disappeared right away, or over time.
I’ve always been strong-willed and stubborn, so I am very determined in my recovery.  I’ve done 14 years of physio and still working through lots of therapies.

The thing I miss most is my independence

The thing I miss most is my independence – I have to rely on someone for everything.
My goal is to eventually become more independent and be able to live on my own with supports.  I would also like to see my friendships and relationships develop more.
I am a very determined person, and will keep working hard on those goals.
Even though I have a degree in Biology, I would also love to become a board game developer.  I’m very passionate about it, and have developed a game that I proposed to Hasbro. Future meetings, negotiations, and consultations are being planned for me to connect with the gaming industry.
My original and only goal when I began at Mind Forward was to make friends.
Like MANY other TBI sufferers, I lost my friends after my accident; some quickly because I wasn’t returning to work or the volunteer job I had. Others lasted A LITTLE longer, but after 15 years, they’re pretty much ALL gone….
Since coming to Mind Forward I have managed to develop new relationships; some closer, others more social. 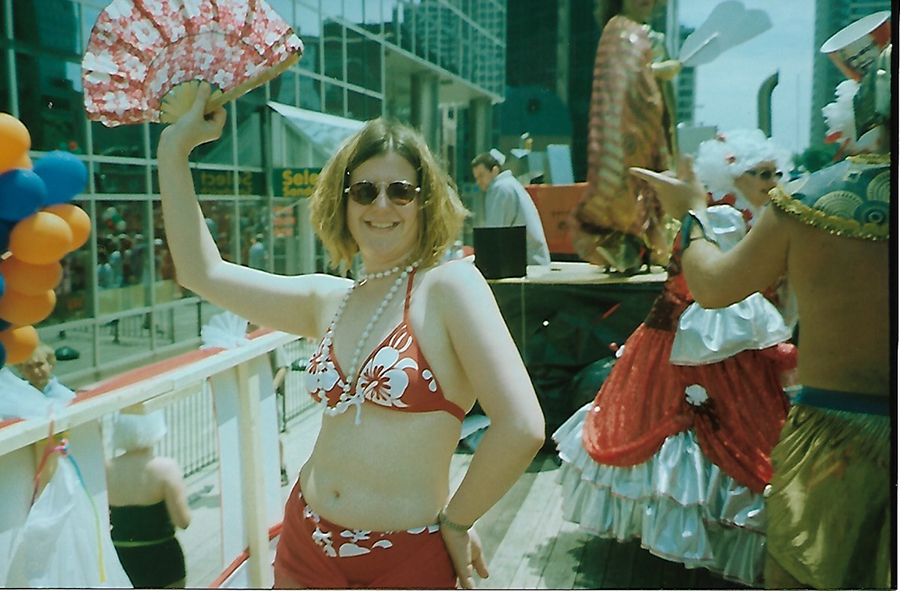 Alanna at a charity event before her accident.